Visit us during the month of February to view our featured artists Scott McRae with his paintings and Walter Geil with his wood carving. 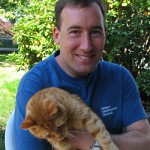 Scott McRae is a native of Longview Washington. He has taken many art classes at Lower Columbia College, is a member of Columbian Artists, and exhibits his work here at the Broadway Gallery. He has received awards in art shows and has been recognized internationally. He teaches art here at the Broadway Gallery to children and adults. He is a graduate from Linfield University with a BA in Art. Scott also is a graduate from Washington State University with a BA in Education. Some of his other interests include gardening, puppeteering at church, and walking.

Scott McRae’s art has similar qualities found in an art movement called Fauvism. The Fauvists were a group of artists known for using alternative colors in their paintings than the actual colors seen in reality. Fauvism was a short-lived art movement that went from 1904 to 1908 and included such artists as Matisse, Derain, and Braque. A good example of the Fauvist technique in Scott’s work can be found in his painting Rose Garden at Longview Public Library where the colors of the building differ from the actual colors of the Library. He does this to emphasize shape and emotions. He likes complex subject matter like flowers and buildings because they demand to be simplified to become even more expressive. Lately he has been painting buildings which can be seen throughout the gallery. Buildings are like flowers because they have strong three-dimensional qualities.

A great deal of Scott McRae’s techniques has come from what the media he uses has taught him. For example, he learned early in childhood when working in oil how to keep colors separate and how to blend when necessary. Other mediums that have been teachers to Scott are charcoal, ink, oil pastel, watercolor, watercolor crayon, and gouache. He is currently working and Acrylic Gouache which is opaque like pastel. 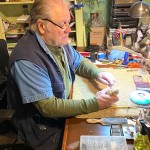 Walter was born and raised in Southern California and studied architecture before being drafted into the U.S. Army. After 30 years working for Southern California Edison, he retired to Port Angles, WA. There he took classes in woodcarving and joined the Pacific Northwest Wood Artisans group. After 10 years remodeling a 1896 Victorian home and many more woodcarving classes he family moved to Cathlamet. He bought a 1910 Craftsman home which needed lots of love and joined the Lower Columbia Woodcarving group. He now lives in Longview where Walter will continue woodcarving and maybe do some stain glass work.