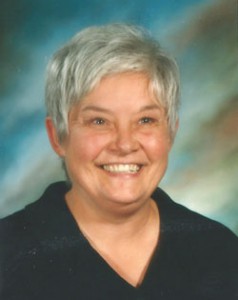 I love stories, hearing and telling them.  They connect me to other people, other ways of thinking or doing things, and other cultures.  I use art to tell stories about what I’ve seen or done or experienced.  Although I work in other media with a different style, these mixed media, collages, and books are the most challenging for me.

By working in layers and with texture, I am attempting to convey content or ideas, and oftentimes, I discover a new idea or opinion or experience during my working process.  When these pieces are finished, they are very seldom what I started out to do, but evolved through the art-making process. 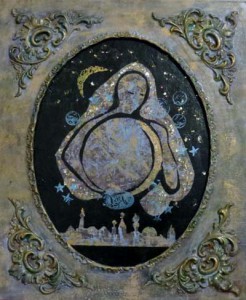 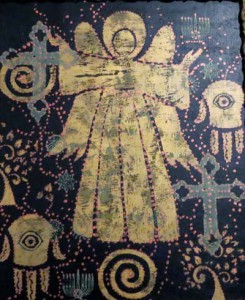 “Angel from God to three religions” 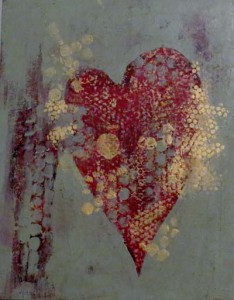 “The holes in my heart have golden memories” 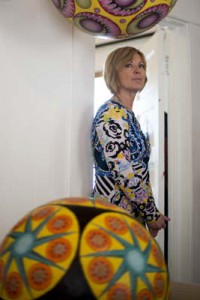 My Papier Maché Sculptures have been described as “Striking” “Hypnotic” and “Mesmerizing”.
I had my children at a young age, and sought my place in the world by studying Chemistry, Philosophy and then ultimately becoming a lawyer. Those pursuits were proved unfulfilling and so I embarked on an inner and outer journey, this time away from the moorings of left brain logic.
As I gave myself the time and space to create, I was drawn to circular and spherical shapes. I created papier mache “canvases” and painted them with repeating geometric patterns. My sculptures are three dimensional Mandalas.
According to the famous Psychologist, Carl Jung, (who, incidentally also intuitively generated round paintings), the Mandala art form emerges during moments of intense personal growth. Their appearance often signals a profound re-balancing process in the psyche. Is it any wonder then that time feels suspended when I’m immersed in my creative process? The act of creating is not only a form of meditation, psychic mountains are moved, one brush stroke at a time. 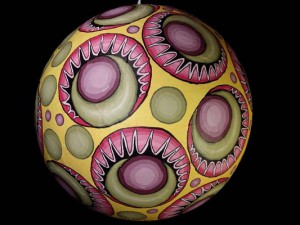 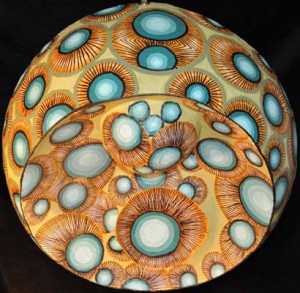 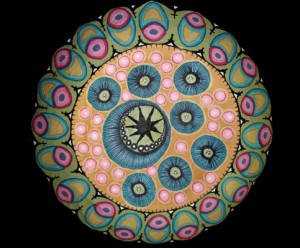 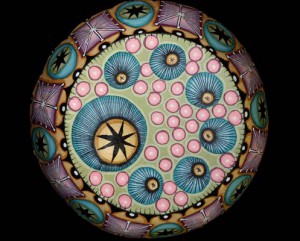 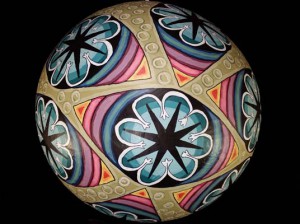 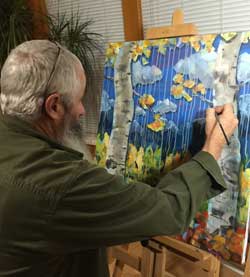 Currently, Ray works at his private studio located in Kelso, Washington. Since 1999 Ray has taught at Clark College and Lower Columbia College in Southwest Washington as an adjunct professor at both institutions. He has been  responsible for teaching courses in art appreciation, design, watercolor, beginning, intermediate, and advanced painting, drawing and figure drawing. He served as a board member for the Washington Community College Humanities Association and  art editor for the WCCHA’s annual publication Crosscurrents from 2009 to 2013. 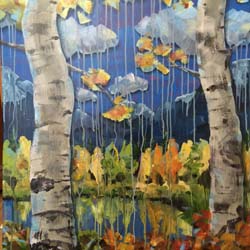 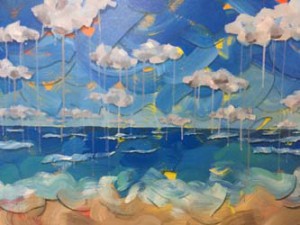 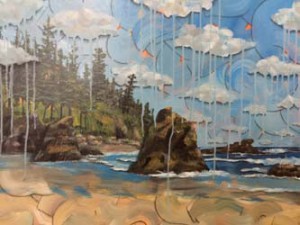